Eggnog is such a funny drink. I mean, really, who thought of putting raw eggs into milk and drinking them?? I'm guessing it was originally some sort of macho thing, a quick way to ingest some protein...perhaps the original protein shake? 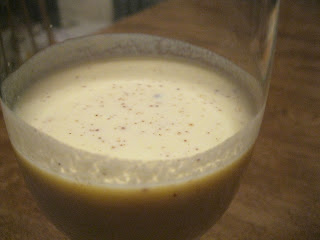 The origins of eggnog are highly debated. It began its birth in England. Milk and eggs at the time of the 17th century, when it first appears, were a commodity and to be had only by those of the upper class. It was sign of superiority to drink such a concoction. A draught of strong beer was often referred to as nog, so it is thought that a combination of the two eventually became 'eggnog.' (For any of you etymological word junkies out there, take a look here.) 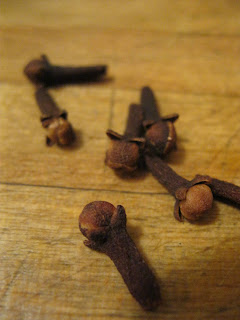 When it came to America during the colonization, a touch of rum was added, as it could be cheaply purchased from the Caribbean. The South gave it that touch of class when, eventually, bourbon became the typical additive. 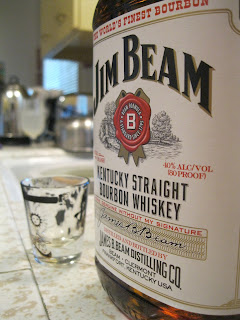 Today, the base recipe remains the same -- eggs, milk/cream, and sugar -- but the variety of spices and liquors is constantly revolving. 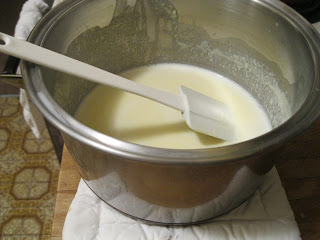 I made mine with nutmeg, a touch of cinnamon, vanilla, and good ol' Jim Bean bourbon. 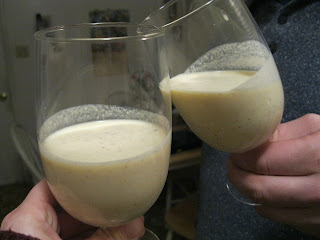 Place milk, cloves and cinnamon in a saucepot on the stove over medium heat. Allow to heat until steaming but do not allow it to boil.
In a bowl, whisk together 2 egg yolks until light in color. (This can be done with an electric mixer or by hand with a whisk -- I did it by hand.) Beat in sugar, mixing until creamy and fluffy.
Pour  just a little of the warm milk mixture into eggs, beating as you do so. This is to temper the eggs so that they do not cook on contact with the hot milk. Slowly pour the rest of the milk into the eggs, stirring constantly.
Pour milk and egg mixture back into saucepan and keep over medium heat. Stir with wooden spoon or flat spatula continuously until it begins to coat the back of the spoon.
Remove from heat. Add half-and-half/whipping cream. Allow to cool for about an hour.
Mix in nutmeg, vanilla and bourbon. Chill until ready to serve.

This makes enough for about two people/cups. You can easily double, triple, or even quadruple this recipe for a large party.
Posted by Laurel at 1:45 PM

Laurel
I write for the love of all things food: recipes, reviews, and rambling thoughts. New posts will be added over at http://muffindome.com from now on. See you there! 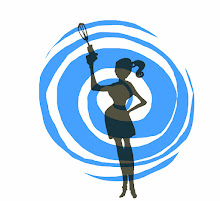